One day while Jesus was standing beside Lake Galilee, many people were pressing all around him to hear the word of God. Jesus saw two boats at the shore of the lake. The fishermen had left them and were washing their nets. Jesus got into one of the boats, the one that belonged to Simon, and asked him to push off a little from the land. Then Jesus sat down and continued to teach the people from the boat.

When Jesus had finished speaking, he said to Simon, “Take the boat into deep water, and put your nets in the water to catch some fish.”

Simon answered, “Master, we worked hard all night trying to catch fish, and we caught nothing. But you say to put the nets in the water, so I will.” When the fishermen did as Jesus told them, they caught so many fish that the nets began to break. They called to their partners in the other boat to come and help them. They came and filled both boats so full that they were almost sinking.

When Simon Peter saw what had happened, he bowed down before Jesus and said, “Go away from me, Lord. I am a sinful man!” He and the other fishermen were amazed at the many fish they caught, as were James and John, the sons of Zebedee, Simon’s partners.
Jesus said to Simon, “Don’t be afraid. From now on you will fish for people.” When the men brought their boats to the shore, they left everything and followed Jesus.

OK, so I’m writing this very late on Thursday evening for Friday, after several exhausting but fulfilling days of preparing St Nathaniel’s Platt Bridge for our first service as a hub after re-opening began. In the middle of it all, I had an ingrowing toenail treated. So, with nearly 15,000 steps today, and just under 6.5 miles, nearly all in and around the church, I’m not in the mood when they announce out of the blue that we can’t meet indoors in the North West again.

Still, tomorrow is another day, and God is still in his heaven, and even if we have to wait, we’re ready. And we have a great team in Chapelfields – a motley team, perhaps, but a great team. And that’s what I want to write about tonight.

You might be forgiven for thinking I only like high-brow cultural stuff based on reflections where I’ve talked about Bach, and Stanford, and various other famous composers. But you couldn’t be more wrong. I have a real low-brow streak. And I’m going really low-brow today. 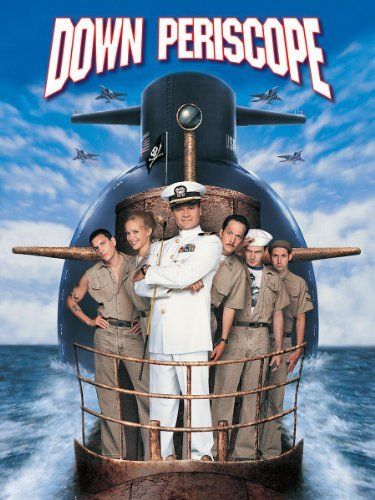 A few of you know – because I’ve inflicted it on you – that one of my favourite terrible films is a low-budget comedy called Down Periscope, starring Kelsey Grammer (Dr Frasier Crane from Cheers). Not to be confused with Up Periscope, an altogether more self-regarding WWII submarine film from 1959, starring James Garner. Definitely not to be confused!

I wouldn’t want to spoil it for you as you rush to watch it this very minute on Netflix – but here’s the background. Lieutenant Commander Tom Dodge (Grammer), hoping for command of a nuclear sub, is instead given command of a noisy, slow diesel sub, and asked to try to evade the US Navy’s brightest, fastest, and best-armed.

Not only is he given the worst possible equipment, he is given a nightmare crew. So it’s really a people film. As one review puts it:

“Down Periscope is a pretty straightforward screwball comedy involving misfits asked to overachieve even as they engage in all kinds of pratfalls and strange behavior.”

Given even that much information, you probably don’t really need a plot spoiler. Here it comes anyway: for me, the best bit is the closing sequence, as Dodge, having led his crew to success, is given command of a brand-new, first-of-its-kind submarine.

But he threatens to refuse it unless he can keep his crew – every last man and woman (and thereby hangs another tale). And that’s rapidly followed by a great, zany end-title sequence to the Village People singing In the Navy.

So now you know how low I can go. But there’s a reason I love the film, and it’s simple.

They are also often about how even rag-tag teams (or motley crews) can be so much more than the sum of their parts. They are about how good leaders have to keep believing in the vision and team in the face of scepticism, defeatism and a whole load of other isms. And they are about seeing worth in people who society and conventional wisdom laugh at.

Of course Down Periscope isn’t a parable, and it isn’t a remotely Christian film, but there’s something profoundly Christian about those values.

Anyway, my love of the film has a personal angle too. It came out in 1996 (and I first saw it), almost simultaneously with the moment when I began my ordination training – non-residential, while still working (hard). As I started my training, I took on a new role, and I was given an impossible task, and a team that I hadn’t chosen. Ha, ha, ha!

Literally over a weekend, a bunch of colleagues were summoned from all over Europe and thrown together as a team. Guess what? We were given an impossible target, we hit double that target, and you would have had to walk over my dead body to take one member of that team away from me, as we went on to the next challenge. (Yes, I have form when it comes to impossible challenges with a motley crew.)

Now, Jesus wasn’t saddled with a team that was deliberately chosen by a vindictive Admiral to make his task impossible. Even so, there’s something of the underdog movie about the way he brings his own motley crew together to be more than the sum of their parts, as he believes in them – and believes in the work God has given them – till they catch up, and as he sees worth and possibility in people that society and conventional wisdom laugh at.

Yes, he deliberately chose them. (Pause to take that in.)

“Luke’s gospel is a pretty straightforward screwball comedy involving misfits asked to overachieve even as they engage in all kinds of pratfalls and strange behavior.”

“Church Wigan is a pretty straightforward screwball comedy involving misfits asked to overachieve even as they engage in all kinds of pratfalls and strange behavior.”

But Jesus deliberately chose us too. We too can be more than the sum of our parts. He believes in us too – and he believes in the possibilities for this slow, noisy, rust-bucket of a  boat called Church Wigan. In fact, Jesus the Captain wouldn’t have any other crew than this one for the next challenge.

I’ll just end with a fragment of dialogue as Dodge meets his crew for the first time:

Friends, we’ve been chosen by the Captain, we’ve boarded the boat, and we’re in mid Atlantic, or the equivalent (and it feels like it). But it’s OK. Our Captain is up for any challenge.

Normal high-brow service will be resumed shortly, but when we can meet again, the DVD of Down Periscope is sitting right in front of me now, and I’ll gladly watch it again any time. For now, I highly recommend re-reading Luke 5.1-11 and reflecting on it deeply as you go through today.